I am trying to get the current running MTU sieze configured on a windows 2003 (W2K3) server. Got a ref from here : http://superuser.com/questions/37686/how-to-tell-what-mtu-is-being-used-in-windows-xp

But during running the netsh command, got some error saying 'command not found'. It turns out the real command for ipv4 is not ipv4 but just 'ip' and ithe one i'm trying to use is not 'subinterfaces' but just 'interface'. SO my final command that wokred as below:

And the result shown is as below, and you can get hell lot of details. :) 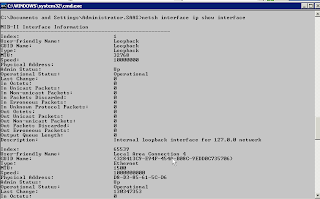 Popular posts from this blog

- March 04, 2019
This is a placeholder for future post, on backdooring SAP servers: 1. SAP profile SETENV_xx parameter - if get local access, or SAP level access can cat or echo a line into profile parameter file - concatenated command for SETENV_+xx param 2. Using ABAP program + SM37 - ABAP program to fetch comamnd from a remote server (HTTP-GET ABAP Function Module) - schedule job every 2 minits interval - for that job, set spool recipient to remote attacker email so output can be sent over - Pre-req: SCOT configuration, Auth for SM36, SE38 to be continued.. //alak
Read more

- December 21, 2021
SAP Note 2836302 brings a report (RCWB_TCI_DIGITSIGN_AUTOMATION) that provides guided steps to help you enable SNOTE for TCI and Digitally signed SAP Notes. This report also guides you with the configuration steps based on your SAP_BASIS release From:  https://blogs.sap.com/2020/07/24/enabling-and-using-snote-for-digitally-signed-sap-notes/ //alak
Read more